as a pioneer in china's e-waste disposal industry, a practitioner of green disposal and one of the leaders in technological innovation, gem is operating its e-waste recycling business with ger as the main body. since its establishment in may 2010, gem has actively promoted the implementation and development of china's "weee disposal fund" green system, built six large advanced e-waste dismantling and disposal bases, ranked among the top three in the industry in terms of total weee disposal, and become a representative of advanced innovation in the field of global e-waste disposal. through years of r&d investment and industrial practice, gem has been developing innovative technologies and extending the industrial chain in the depth and breadth of e-waste recycling, realizing the deep green recycling of e-waste and forming the e-waste recycling industry chain of "e-waste recycling and dismantling - waste plastic recycling - metal recycling".

the company took the lead in setting up the national e-waste recycling engineering technology research center, and has presided over and participated in the formulation and revision of 65 national and industry standards and obtained 199 patents in the core areas of e-waste treatment, including efficient dismantling and sorting system of e-waste, preparation of modified recycled plastic technology of waste plastic, circuit board pyrolysis and clean disposal technology, and pollution prevention technology, etc., forming a complete technical system and standard system covering the e-waste recycling industry chain, including e-waste recycling, disassembly, sorting, waste plastic recycling, metal recycling, information control, and pollution prevention and control etc. the company has undertaken 22 national and provincial scientific research programs, such as the national key r&d program and 863 program, and solved key industrial and technical problems in e-waste recycling, and was awarded the national science and technology progress award in 2018 for the project of "key technology and industrialization of green recycling of e-waste", and become a driving force of technological innovation in this industry. 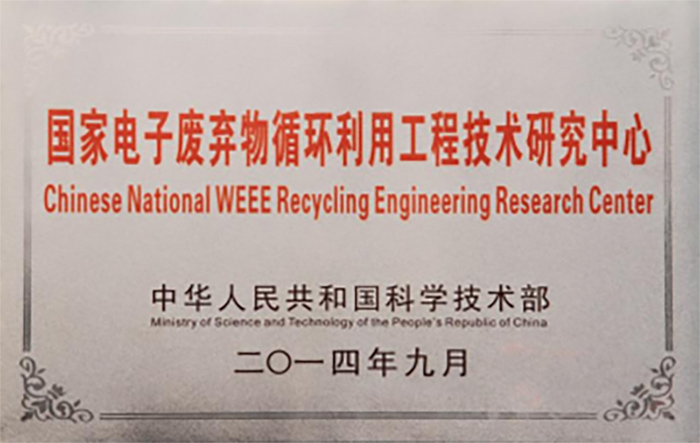 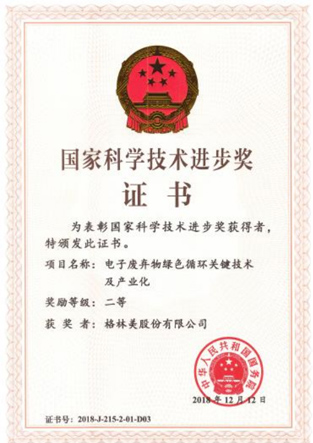 gem's modified recycled plastic products have successfully entered the supply chain of the world's top 500 companies such as ineos, lyondebasel, borough, exxonmobil, etc., established good cooperation relationship with new material modification factories such as huitong, and entered the supply chain of automobile and home appliance companies. in june 2020, gem as the first initiator joined sinopec, p&g, dow chemical, exxonmobil, costco, suez, bp china, basf, sk integrated chemical, a total of 16 units established a joint working group on green recycled plastics supply chain under the leadership of china petrochemical federation and china materials recycling association. the working group is committed to solving the bottleneck problems in the construction of plastics recycling economy, promoting the application of green recycled plastics and the construction of green plastics supply chain through the cooperation of important stakeholders, and exploring a new model for the development of plastics recycling economy in china and the world. 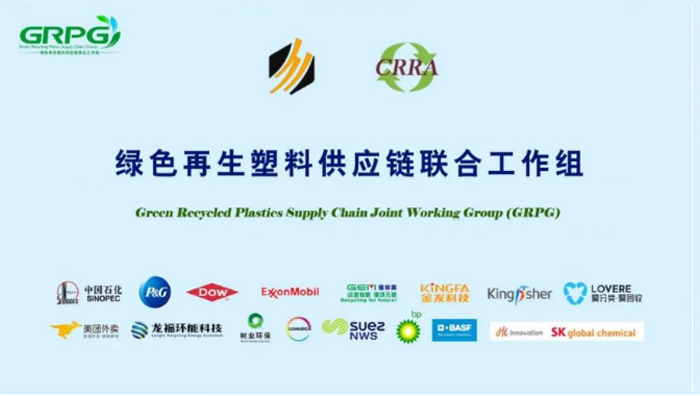 since 2007, the company has been committed to the e-waste recycling mode, technology mode, equipment technology, product mode, information management and control mode and pollution prevention and control mode and other e-waste industry chain business model for innovation and entrepreneurship, which actually promotes and witnesses the whole development process of the national e-waste industry; during 2009-2011, guangdong, hubei, jiangxi and other provinces of recycling and disposal of backbone enterprises participated in the practice of the "old for new" policy of home appliances to promote the implement of national "old for new" policy so as to make positive contributions; in 2013, gem started the construction of waste plastic modification and recycling and the deep recycling of waste circuit boards; from 2015 to 2016, gem successfully purchased the parks in shanxi and inner mongolia and expanded to the northern region, and in 2020, gem relied on jiangxi green recycling as the main body to integrate and restructure the e-waste segment of the group.

gem has six e-waste recycling parks in jiangxi, hubei, shanxi, henan and inner mongolia provinces, all of which are qualified to handle weee and are included in the fund subsidy list, with a total dismantling capacity of 12.56 million sets of "television, refrigerator, washing machine, air conditioner and computer". the company's six e-waste recycling parks have formed a strategic geographical layout radiating north china, central china and east china, establishing a complete industrial chain of weee recycling, dismantling, recycling and sales. gem has built a 60,000-ton-per-year production base of recycled plastics in fengcheng, jiangxi, to deeply regenerate and modify the plastics in e-waste. jingmen gem established a production line with an annual handling capacity of 20,000 tons of waste circuit boards, and obtained the hazardous waste operation license issued by the department of ecology and environment of hubei province. it has become one of the few comprehensive treatment enterprises in the industry that has realized the processing of electronic waste from dismantling to regeneration and modification of waste plastics and deep resourceization of waste circuit boards. 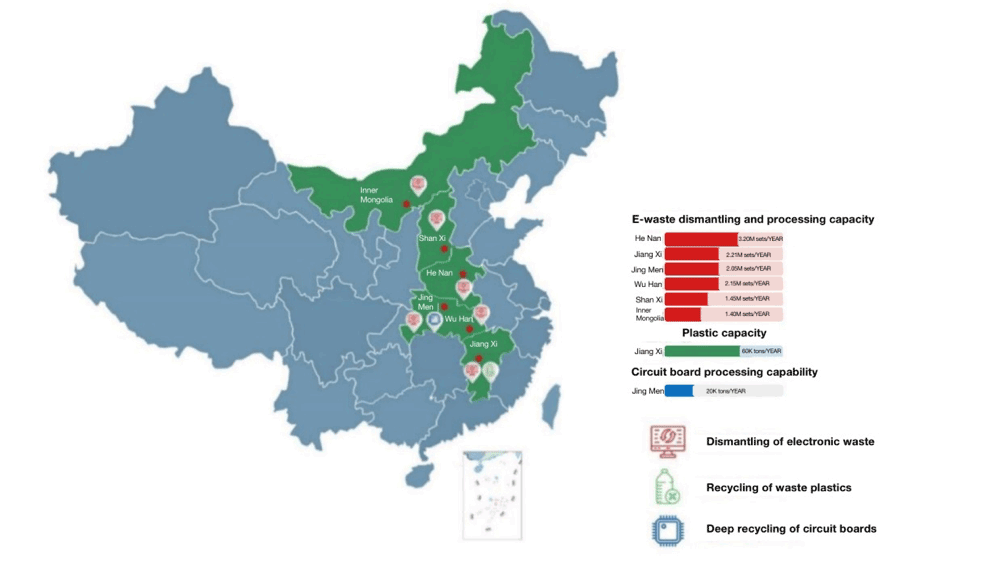